On our recent Kusini agent FAM to Uganda with Classic Africa Safaris, we had the opportunity to join Uganda Carnivore Project (UCP) for a morning tracking lions in the northern Kasenyi plains of Uganda’s Queen Elizabeth National Park (QENP). I would highly recommend the activity for your travelers visiting QENP!

The Uganda Carnivore Program is devoted to the research and conservation of Uganda’s large carnivores, including lions, leopards, and hyenas. Previously active in many of Uganda’s national parks, today it is focused on the northern sector of QENP. They collaborate closely with the Uganda Wildlife Authority (UWA) and Makerere University.

UCP has two primary focus – 1) scientific research and monitoring of resident carnivores; 2)
community-based wildlife conservation with the goal to develop a collaborative, holistic plan to reduce deadly instances of human wildlife-conflict with communities around the park.

QENP covers an area of nearly 800 sq miles. However, running through the center of norther sector of the park is a major highway. There are also eleven villages within park boundaries and many more located just outside the borders, with no buffer zone in between. It is estimated that more than 20,000 people live in the villages located within the park, and that more than 70,000 live in the areas immediately surrounding it. Hence, the potential for human-wildlife conflict is exceptionally high. 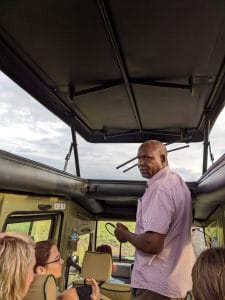 The lion tracking activity begins with an early start. Our group departed Elephant Plains Lodge at around 6:30am for the short drive to the Kasenyi gate of QENP. Here we checked-in with UWA and met our tracker, James Kalyewa, the Senior Research Assistant from UCP. He climbed aboard our CAS vehicle and we were off tracking lions!

James gave us a short talk about lions, their biology and the threats they face in QENP. He also briefed us on the radio-telemetry equipment as he was tracking the collared lions. For the uninitiated, listening to the faint “beeps” indicating a lion nearby, seemed like a very inexact science. But with James’ experience, we were soon in fast pursuit of pride of five lions!

Within QENP, vehicles must stay to the designated roads and tracks. But one of the distinct advantages of the lion tracking activity is the ability to drive off-road in search of the lions! It was fun watching James and our CAS guide, Habib, interact as they were tracking, using a combination of hand signals and the local language.

James located the pride of five – lounging in the sun on the plains – about 15 minutes after we left the park gate. The pride was only about 100 yards from the road but due to the high grass in April, we would likely have never seen them if not for the telemetry tracking. While we were viewing and taking photos of the pride, several vehicles drove by on the nearby road, straining to see what we were looking at just a short distance away. As a group, we certainly felt privileged and quite special! 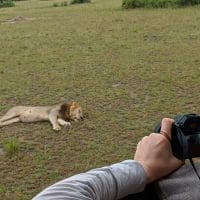 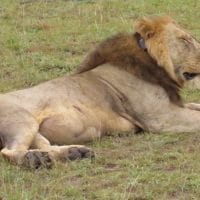 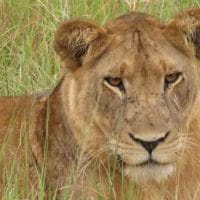 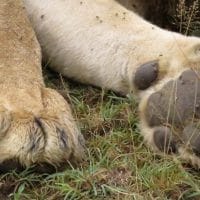 Our next tracking target an adult male. James located him rather quickly, again lying in the sun like a good lazy lion should do.

As we had been on the lion hunt for over two hours by now, we left the lazy male lion in search of a final mystery target. This was the most adventurous and exciting tracking we’d done as Habib navigated some pretty rough off-road terrain in search of James’ target. James was clearly excited about what we were tracking, but he kept silent on the species until we were nearly on top of it – a female leopard and two cubs, nested into a dense Euphorbia tree! While we weren’t able to capture many good photos of the mostly camouflaged cats, it was again a thrill to have located these hidden leopards and to spend a little time with them.

Overall, the lion (and leopard!) tracking experience was well worth the time and the investment (Again, pre-booking the activity is critical). It was nice to be able to go off-road to find the cats and to view them without company from other safari vehicles and self drivers. We felt pretty special and grateful for the exclusivity of the experience.