With inexhaustible energy, the Imvelo Safari Lodges Cobras Community Wildlife Protection Unit rangers and scouts maintain the peak level of fitness required to be effective in the field. One of their routines is a daily run around their community conservancy and across the Ngamo plains.

Running with them is great fun. Chanting as they run to motivate and maintain rhythm and pace, the distance is eaten away, hearkening back to a bygone era of the impis of Mzilikazi and the great Shaka. It’s invigorating and pretty cool too. So, Imvelo hatched the idea for the Cobras Run ’21!
An informal group of runners from Bulawayo who call themselves ‘Running Wild’ were the first participants, with their entry fees donated to the Cobras to go towards purchasing berets for their uniforms. The inaugural run was a total distance of 30 kilometers broken into three legs, all a little different. 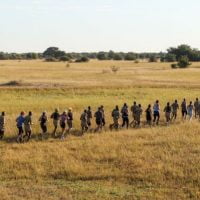 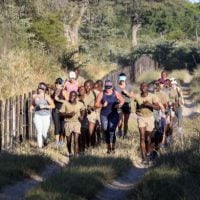 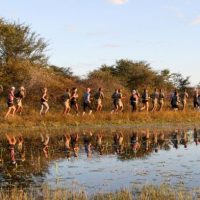 Leg 1 started in the cool air before dawn at the Cobras headquarters with runners distributed evenly amongst the Cobras. Very quickly the Cobras’ rhythmic chanting became part of the dawn chorus along Hwange’s southern boundary. The second half of this stage unfolded beautifully just after sunrise past the waterlily studded pans in and around the Ngamo conservancy, then it was back to Cobras HQ.

Leg 2 also kicked off from HQ, but this time the route was through the villages of Ngunyana and Ngamo. The physical presence of the Cobras was unnecessary, but our runners were still escorted by support vehicles. Water stops on this leg were at village pumps, accompanied by fruit and locally grown sugar cane. Under an Umtshibi tree where the last water stop was stationed, our runners were rejoined by the Cobras, ready for leg 3.

The final leg took our runners through the Bomani concession with the Cobras now flanking escorts to them. During the preceding hours Imvelo’s guides had carefully pre-scouted the route, to ensure there were no unwanted surprises along the way. 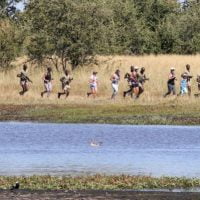 Here, as the sun got higher and temperature climbed, the tough running conditions really took their toll. The Kalahari sands that cover southern Hwange challenge both runners and cyclists alike, adding more agony to tired legs. But encouraging each other and boosted by their Cobra escorts, the runners made their way past hippos and wildebeest, finally resting under the Cobras flag on the lawn in front of Bomani. Comments ranged from “Cobras singing is better than any iPod…” to “Best run of my life…” and “Felt completely safe the whole way round.”

The awards ceremony included generous ration packs and sunglasses for the Cobras, and buffs and hoodies for the runners. Best of all was a final celebration Sunset Cruise on the Elephant Express across the Ngamo Plains. Watch this space for next year’s Cobras Run dates!!

Sincere thanks from the runners, Cobras and Imvelo go to the many people and organisations who contributed to making this a most memorable event:

Finally, a very special thanks from Imvelo to Yolanda Watson and the runners of ‘Running Wild’ that made Imvelo’s inaugural Cobras run a rousing success! 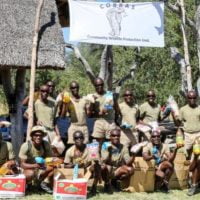 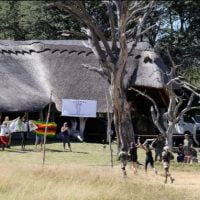 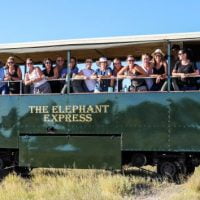