Western Zimbabwe, known as Matabeleland, is an area of erratic rainfall, but life – human, animal as well as vegetable – is dependent on this resource.  In drought years, when there has been serious crop failure, very few students attending the rural schools around Hwange National Park have any lunch and often only receive one meal a day at home. As a result, these children are often not up to the long walk to school simply because they don’t have the energy. In these years, school attendance drops drastically and/or student grades suffer due to a poor concentration because of a lack of food, and thus energy.

After witnessing exhausted hungry children falling asleep in class and struggling to walk to and from school every day, Imvelo Safari Lodges have made it part of their mission during drought years to provide a cooked meal to every school child at the schools in the Hwange districts they support. 2016 was Imvelo’s biggest school feeding year to date, where they provided 412,000 meals to school children in the area. Sadly, however, 2019 will be a far worse drought year. . .

The 2018/19 rainfall season was among the worst on record in parts of the country, characterized by significantly below average rainfall. As a result, Zimbabwe is facing its most devastating drought in 40 years. USAID’s Famine Early Warning Systems Network predicts “crisis” level food insecurity outcomes‘ through at least January 2020. 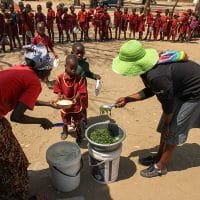 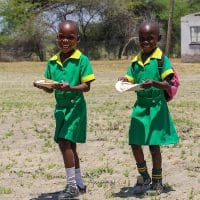 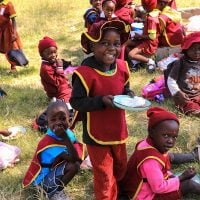 To combat hunger during this record drought, Imvelo is now feeding 2,660 school children each school day at 11 rural schools near their lodges in Hwange National Park and Victoria Falls. The lunch program typically lasts around four months, over the winter term, from May to August. In 2019, due to the severity of the drought, the program will be extended to the third term from September to December. In total, Imvelo will provide upwards of 425,600 school lunch meals in 2019!

The funds raised for this school lunch program are used to buy maize meal (corn meal), red sugar beans and sunflower oil. These ingredients are then used to prepare the Zimbabwean staple food sadza (a stiff corn meal porridge like polenta) and beans, which provides these hungry students a hearty and filling lunchtime meal. In addition, Imvelo provides all the logistics including sourcing, storing and distributing tonnes of food.

$4 is all it costs to provide lunch to a school child each day for a month ($.20 per meal). A donation of $50 will feed 250 students one meal or one student for the rest of the year! If you or your company would like to sponsor meals for a child or classroom, contact us.