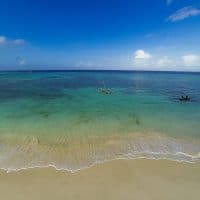 “Tourism will be the positive catalyst for change on Pemba – the only sustainable revenue driver for conservation. Our guests at the Manta Resort will literally be the heroes of Pemba’s future” Matt Saus, Managing Director and Co-Owner of Manta Resort

The Kwanini Foundation, powered in part by the Manta Resort, is delighted to announce new funding from USAID PROTECT (Promoting Tanzania’s Environment, Conservation and Tourism). This is the first project of its kind, and it will run for the period of one year through July 2020. The task at hand is no small feat and as the foundation put it: “The overarching goal of the project is to obtain robust scientific data to inform and underpin the management decisions needed to protect the biodiversity and fisheries potential of the coral reefs of western Pemba. Through the project, we are looking to address the key threats to coral reef biodiversity off the north-west coast of Pemba, which are: 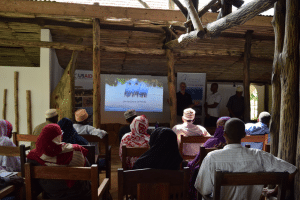 Bringing together the foundation stakeholders, local community groups including fishermen, police, local council representatives, and women’s groups among others to focus on the importance of the Kwanini Conservation Marine Area has formed an important relationship between the foundation, government and local community. You can read more about the project at kwaninifoundation.org.

None of this would have been possible without the many years of tireless effort put forth. Over the course of the past decade-plus, the Manta Resort on Pemba Island, Tanzania, has transformed from a once low-key dive operation to a luxury resort and the driving force behind the protection of a vast track of coral reef in the Indian Ocean. In 2006, armed with a map and a driving desire to conserve our oceans, Matt Saus, Managing Director and Co-Owner of Manta, found himself on a journey along the Indian Ocean coastline of Africa to locate an ideal spot for the world’s second Underwater Room (the first being in a lake in Sweden and the brainchild of his business partner and designer). It was then that he discovered Manta on one of the last islands in the Indian Ocean that’s unexploited and “still real”. With a gorgeous beach and active reef – it was perfect. 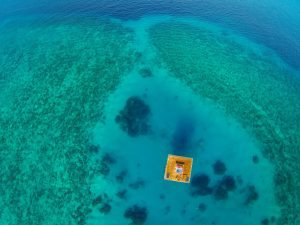 In due time, Matt gained agreement from the ministry of fisheries, Pemba Channel Conservation Area Management, local fisherman and the neighboring communities, to put into place a “no netting” policy over one kilometer of reef in front of the resort. He and his lovely wife, Carina, teamed up with their partners to painstakingly restore and revamp the property while the Underwater Room was being constructed. All the while, realizing that Manta was to be so much more than an underwater room – it’s about the island of Pemba, and the people of Pemba. It was following this vision and criteria that the Kwanini concept of understanding why they were doing this and knowing it was for the people and environment of this beautiful island came to be – putting attention on the plight of our world’s reefs is vital to the welfare of all.

In today’s world, even paradise needs a little TLC from time to time. In Pemba’s case, the Kwanini Foundation was created to help preserve and sustain the land, people, and ocean life of the island. There are so many ways in which your company or travelers can be involved, and we invite you to begin exploring how you and your guests can be part of it! Visit the Kwanini Foundation website or click here to make a donation.