The magnificent lion called Vin, recently photographed here at last light by Imvelo Safari Lodges guide Brendan Judge, is one of the resident males in the Nehimba area with his coalition partner Diesel. They took over the Nehimba pride led by the well-known lioness Horse in early 2019 (The Horse so named because of her size). “Vin is a very relaxed cat but the jury is still out on who is the better looking male – Vin does have an exquisite blonder mane,” says Brendan. The sightings of this pride, which is now 16 strong, is frequent as their territory is around Nehimba camp – so Imvelo guests have been enjoying plenty of predator action and beautiful photographic opportunities – and this is likely to increase in the coming months! 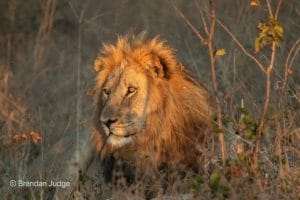 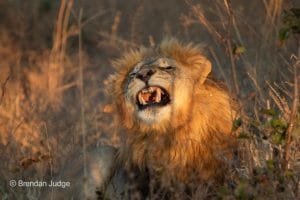 Guests enjoying nightcaps around the lodge campfire were treated to a show when Vin was spotted with one of The Horse’s daughters. Says guide, Brendan Judge; “We heard a commotion and growling and then just after dinner the two were spotted near the lodge waterhole mating, which carried on through the night, next to tent 9. We always say Nehimba provides the perfect arm chair safari experiences, as the action often comes to us due to our location and setting and our guests really loved the thrill of this sighting a few metres away.” All being well, cubs will be born in about three months’ time, so lots to look forward to if you are visiting soon! 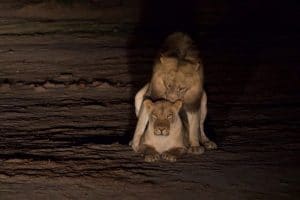 Nehimba also offers the opportunity to spot other rare and diverse species too. Camp guests have been spoiled with wonderful sightings recently and have been able to sit and enjoy time with the abundant wildlife in very tranquil settings with no other vehicles around, as Nehimba is on the largest private concession in Hwange National Park. The Imvelo camps also offer a lot of flexibility on game viewing times. “These dogs were seen at about mid-day, lying half in the water. They seemed to have full bellies so possibly they were cooling off after a long morning of hunting. There are thought to be part of a larger pack, which split up during the hunt. The male had a collar and probably is the alpha – or breeding – male of the pack, and the female seemed to be heavily pregnant with teats showing. Mid-year, in Zimbabwe’s winter, is when the dogs den to have their puppies, using an old antbear or warthog hole, and moving location several times before the youngsters are old enough to follow the pack. Hopefully we will get more chances to photograph and share these awesome sightings of the pack soon” says guide Brendan Judge who was on this sighting. So the even better news is there may be wild dog pups as well as lion cubs around camp in the coming months. Exciting times to come on safari with Imvelo! 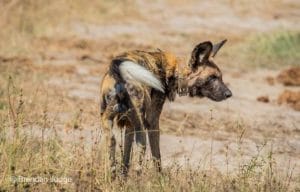 Another rare sighting recently was a brown hyena right in camp at the Nehimba waterhole. “The species is so secretive that sometimes their presence is only discovered from their unique scent markings!” says Brendan. “The brown hyena has a long, shaggy brown coat and smaller body build than the spotted hyena. This was my first sighting ever in seven years of being in the bush – what may be called a very lucky sighting!” The brown hyena is omnivorous – eating just about anything it can catch or find, including insects, rodents and even fruits, as well as scavenging larger predator kills. It is known to enjoy wild melons even when other sources of water are available in the dry season. In the Kalahari Desert, clans can have territories of 300 square kilometres, and individuals will range up to 30 kms a night to forage. The individual was photographed by Brendan at first light while his guests watched on, delighted, enjoying their steaming cups of coffee in the main lodge – what a perfect start to the safari day. 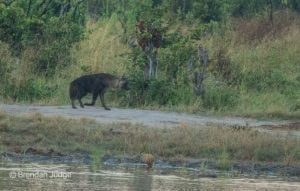 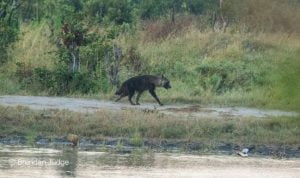 Nehimba offers incredible opportunities for unusual sightings – as well as roan, leopard and of course the very big herds of tuskers right in camp which – an unforgettable experience in the dry season! Nehimba should be on the bucket list if an action-packed safari adventure is what your travelers are looking for!