While visiting Nehimba Lodge in Hwange National Park this past September with a group of agents, Imvelo Safari Lodges’ Mark Butcher made an off-hand remark that we were headed to “the cathedral of elephants” for sundowners that evening. The group all had the same reaction – huh? “Trust me,” said Butch. “You’ll understand when you experience it.” With that exciting foreshadowing, we made our way to the Nehimba Seeps in eager anticipation. 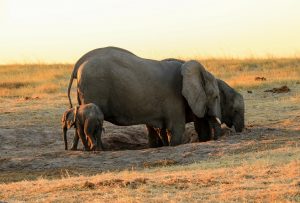 An elephant digs for minerals at the Nehimba seeps

Located on Imvelo Safari Lodges’ private concession, the Nehimba Seeps is a designated conservation area and one of the few year-round, naturally occurring water sources in Hwange (Hwange National Park is one of only two parks in Africa without major rivers. Etosha in Namibia is the other). It was an ancient source of surface water once used by the San Bushmen who originally inhabited the area. Today the Nehimba Seeps is a vital source of water and minerals for the elephants and other wildlife who inhabit the area.

Ted Davison, the original warden of Hwange, does a great job describing the name “Seeps” in his book “Wankie – The Story of a Great Game Reserve.”

Here the water oozes slowly out of the fine sand into shallow wells dug by the elephant. At each place there will only be some six to ten wells, with great competition for the water in them, and the wells will be occupied all the time during times of stress. The adults and calves tended by their mothers can get a drink, while adolescents, who have no one to fight for a place for them, are unable to get a drink and spend so much time battling to get at the water that they sometimes die of starvation and thirst. This state of affairs was very prevalent during droughts before the advent of pumps, but today the pressure on these seepage springs has been much reduced.”

The Seeps don’t appear very cathedral-like at first blush. But after spending a bit of time there it was clear to see why this was such a special, almost spiritual place for elephants. . . and for visitors.

The dozen or so small holes were each occupied by large bulls, patiently waiting for the water, you guessed it, to seep into their hole so they could take a sip. It felt a bit like a bar where the regulars always sit in the same stool slowly nursing their beer. And whether it was due to respect for this ancient water source or they were simply conserving every precious sip of water, the elephants at the seeps were much more sedate unlike the often raucous elephant behavior you see at waterholes with lots of splashing and spraying of water.

It was also plain to see the hierarchy of the bulls – the older and stronger dominate, with the younger and weaker adolescents being forced to patiently wait their turn for a sip.

As the sun dropped below the horizon, the scene became even more ethereal, with the arriving elephant congregation (or bar faithful!) silhouetted against the setting sun  as we sipped our gin and tonics and savored the silence and the stillness of the Nehimba Seeps, the Cathedral of Elephants. 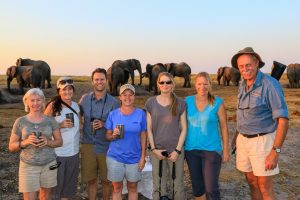 Sundowners at the Seeps during the dry season is not to be missed! 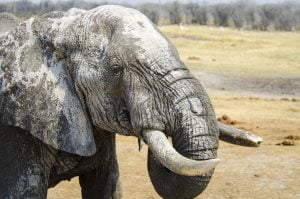 An elephant at the Seeps covered in salts and minerals. Photo: Duncan Watson 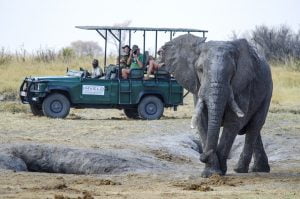 A great shot of several of the natural “seeps.” Photo: Duncan Watson 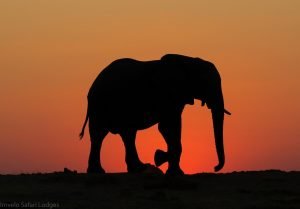 Arriving to the Seeps, a beautiful elephant bull silhouetted against the setting sun. Photo: Mark Butcher 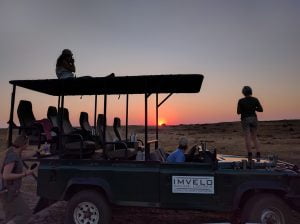 The sun setting over the Seeps