Everyone thinks of gorillas when they think of Uganda, but there’s so much more to the country. Gorillas are a very worthy reason to visit, but travelers that only go to see the primates are missing out in a big way. I made my third visit to Uganda with Classic Africa Safaris last year, and once again, I marveled at its myriad attractions. From big game (tree-climbing lions, buffalo, leopard, unique antelope (including the near-endemic kob), elephants and much more) to bird life that would change the mind of someone indifferent to avian beauty, there’s a lot to see. There’s also a LOT of water.

There is so much water, in fact, that it’s not a stretch to suggest that Uganda is one of the best, if not the best destination in Africa for water-based safaris. From Murchison Falls to the Kazinga Channel, water-based safaris are rich not just for bird enthusiasts, but for big game enthusiasts as well. Water activities beyond cruising are on offer too – including white-knuckle whitewater rafting and excellent fishing.

Most of my water-based safari experiences in Uganda have been on the Nile near Murchison Falls and in the Kazinga Channel, but it’s important to remember that travelers that land in Entebbe have Lake Victoria at their doorstep, and just a 12km away they can seek one of the world’s most sought-after birds – the shoebill stork. The Mabamba swamp extends across more than 100 square kilometers from a shallow marshy bay on the northern shores of Lake Victoria, is now possibly the most reliable place to see the rare species.

Farther afield, Murchison Falls National Park has a lot to engage travelers. The Falls themselves are quite impressive – the entire volume of the Nile River is jammed through a 20-foot-wide gorge, crashing dramatically down 150 feet. I found visiting the top of the falls as the river thunders by and rockets through the gorge to be my personal highlight, though seeing it from the Nile by boat below (from a distance) is also excellent. Cruising the river (from Classic Africa Safaris’ (and my!) favorite park accommodation Bakers Lodge) makes for a gorgeous morning or afternoon activity. The bird life is simply awesome – we saw dozens of species, some numbering in the hundreds, if not thousands. But it’s not just birds – we saw fishermen, crocodiles, hippos, Cape buffalo, colobus monkeys, a variety of antelope (including the endemic kob) and even elephants and lions! 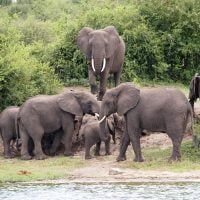 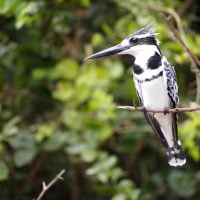 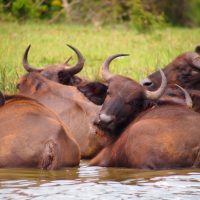 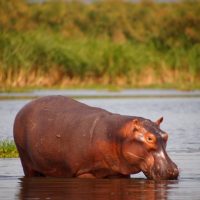 A cruise along the Kazinga Channel (which connects Lake Edward and Lake George in Queen Elizabeth National Park provides a similar embarrassment of riches. After an early departure from Kyambura Gorge Lodge (where I could have stayed for quite a bit longer), getting on to the water in the cool of the morning was a delight. Our first sighting was a heard of elephants coming down to the water’s edge through a forest of euphorbia candelabra. We stopped to watch them take great slurps of water and scratch any itches along the rough sandbank. Hippos were a nearly constant feature (including some adorable babies…they aren’t as scary when they’re tiny!), as were myriad species of kingfisher, including the pied – who nest in the banks of the channel. We watched them (successfully) fish, and also saw a mother Egyptian goose with her considerable brood approaching a crocodile on the banks with his jaws wide open. Crocs do it to keep themselves cool, but it looks pretty intimidating! 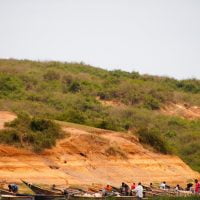 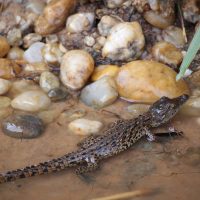 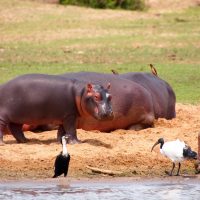 A final highlight on the cruise is the chance to observe the waterside village at the end of the channel nearest Lake George. The fishing village is perched maybe 100 yards above the water, with a fleet of rowboats that ply the waters for fish. Everyone goes about their business, immune to the passing boat and the nearby Cape buffalo and hippos, as are the goats who graze just above where the hippos bask in the sun. It all seems very pastoral and just a tiny bit surreal.

These water safaris are a natural part of a Uganda circuit, and are a do not miss for travelers. The wildlife and bird life are astounding, and the pleasure of being on a boat rather than a vehicle make them a highlight of any visit.