New Activities at Monteverde and Arenal

The creative team at Costa Rica Sun Tours are thrilled to share a new series of stimulating talks, immersive activities and experiences, to be enjoyed while visiting Monteverde and Arenal. We are all well versed in the adrenaline-pumping tours zipping through the cloud forest canopy, rappelling down waterfalls, and rafting the pristine rivers and so on. As it turns out, many travelers are looking to delve a little deeper and this is where CRST’s expertise really shines. The following is just an example of what’s to come in this new series. 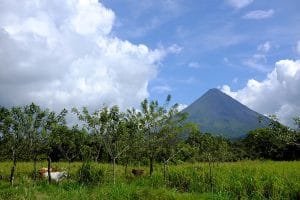 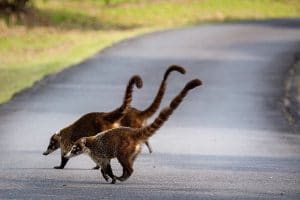 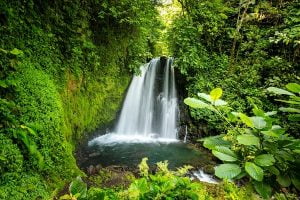 Curicancha it is a prime destination for naturalists and curious minds alike – a haven of wonders awaits within this mystic cloudforest refuge. This unique reserve borders the famous conservation complex that includes the Monteverde Reserve, the Eternal Children Rainforest and the Arenal Volcano. Curicancha offers miles of trails that lead through the forest and where such famous birds like the resplendent quetzal or the three wattled bellbird can be seen feeding on wild avocados! Our guides know exactly where to look for wildlife here and in addition to the emblematic cloudforest birds, you can search for monkeys, sloths, armadillos, agoutis and coatis, each creature is a normal inhabitant of these secret paths. The Curicancha experience is made even more special with our private access to a series of hidden paths that other visitors are not permitted to explore! With gentle inclines, well-kept trails, rest benches in hummingbird gardens, and amazing lookouts to the Nicoya Gulf and the Pacific waters, this local and family-managed wildlife refuge is awaiting you on your next visit to Monteverde.

Only 20 minutes from Monteverde is a magnificent look out situated within a private farm. Boasting some of the best sunsets and vistas of the Pacific coast in Costa Rica, this secret spot is just a short stroll from the road. With only the silence of nature around you and excellent views of Puntarenas and the dry lowlands of Guanacaste, we think it’s an ideal place to relax and enjoy! Don Gerardo Vargas and his wife Lizbeth are the owners of this private farm and have graciously invited us to enjoy private access to their land!  Let us take you to Cerro Pinocho with wine and cheese to enjoy after a great hike in the misty cloudforest! Your reward: a magnificent 360-degree vista toward the Pacific waters of Costa Rica.

Try your hand at painting! The Commission of Artisans of Santa Elena de Monteverde (CASEM) group was born as a result of the challenging economic crisis of the 1980´s, and in response to the need to diversify the agricultural production of the Monteverde area, which was essentially dedicated to the sale of fresh milk to make fine cheeses through producers of Monteverde. In 1983 a group of eight women created the coop and today there are 82 women and four men who are involved. These amazing artisan women are predominantly residents of the Monteverde district, they are mostly housewives who want to continue taking care of their families and craft their products in their own homes. They are skilled producers of handicrafts, textiles, jewelry, recycled materials, and paintings depicting the ecology of the area. One of the leaders, Doña Nery Gomez , a native of Nicoya in Guanacaste Province, is dedicated to the art of painting, embroidery, leather work, and quilting. Doña Nery is a lover of leaf cutter ants, and she views the cooperative as a leaf cutter ant colony – a community working together for the betterment of all! During our visit, Dona Nery has kindly offered us a private workshop where you have the opportunity to try your hand at painting and spending special time with her.

Monteverde Talks: These talks are ideal for enhancing your stay in Monteverde. Typically scheduled as a pre-dinner discussion, the talks last an hour or so and provide thought-provoking discussion about the biodiversity, environmental challenges, and history of the region.

Bellbird Conservation, by Victorino Molina Rojas: The Three-wattled Bellbird is in danger of extinction and there are only four populations of this Central American endemic bird left in the world – one of them is in Monteverde.  Expert biologists in Monteverde give us a private talk on efforts in conservation, restoration, and reforestation of the pacific slope habitats and how this will help protect and mitigate the decline of the vulnerable Three-wattled Bellbird.

Sleuthing the Sloth, by Mark Wainwright: During this presentation, we’ll cover all things sloth – from their bizarre ancestry, to the ecosystem that lives in their fur, to their unique diet and pooping habits, to their social life – you can’t make this stuff up!

Hummingbird Stories, by Mark Wainwright: Monteverde is home to an incredible 30 or so species of hummingbirds. In this presentation, we will share amazing hummingbird stories, from how they evolved, to how they fly and feed and sleep, to why they are iridescent, to why – especially in a cloud forest – their intricately choreographed co-evolution with the timing and design of the specific flowers each visit, is critical to the health of this ecosystem.

Murder Mystery! A whodunnit of global amphibian declines, by Mark Wainwright: Between 1987 and 1988, the Golden Toad – a poster child of conservation efforts in Monteverde and unique to the area – suddenly disappeared. It was one of the first of dozens of amphibian species around the globe to suddenly and mysteriously disappear. What was the cause?  In this presentation we will look at the evidence against the main suspects – a veritable who’s who of global environmental challenges – and also share some surprising, good news.

Biodiversity and Conservation in Monteverde, by Mark Wainwright:  Monteverde sits next to a block of protected areas that is one of the most biodiverse spots on the planet. Why? What is a cloud forest? What other forest types are in the region? Why is protecting these forests so important? How safe are the area’s animals and plants and what more can we do to safeguard their future? In this presentation, we will introduce you to Monteverde’s spectacular biodiversity and, along the way, answer these and many more questions.

The history of the Quakers in Monteverde, by Ricardo Guindon: We’ll discuss in the detail about the unique history of the beginnings of the Monteverde community. This presentation will include a special display of photographs of that epoch, including childhood stories told by Ricardo Guindon, son of the founders of Monteverde. Monteverde is an area that began as an agricultural area, and now has become a conservation and tourism niche. So many fascinating stories and coincidences leave us wondering what the future of our community will be like. 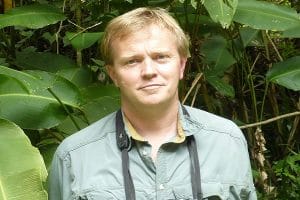 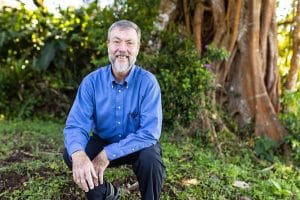 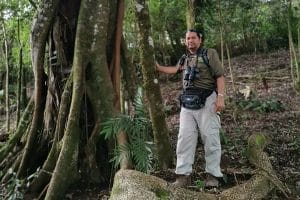 Mark Wainwright grew up in England, went to university in the U.S. and Costa Rica, and has lived and worked in Costa Rica since 1991. He leads courses in tropical ecology, has written and illustrated two books: “The Mammals of Costa Rica: A Natural History and Field Guide” (Cornell University Press); and the children’s book “Jungle Jumble” (Fundación Neotrópica), and has illustrated more than ten field guides to reptiles, birds, mammals, amphibians, and tracks for Costa Rica, Panama, Belize, and Peru for Rainforest Publications. He has also worked in film, ongoing research on amphibians, and for many years has been extensively involved as a board member for the Children’s Eternal Rainforest.

Victorino Molina Rojas was born in Santa Elena de Monteverde and has lived his entire life in the area. For the last 25 years he has dedicated himself as a naturalist guide and researcher for a conservation and reforestation project called the Bellbird Project. Currently he is dedicated to giving talks about the Bellbird and the history of Monteverde. He is also the president of the Santa Elena Aqueduct and a member of the board of directors of the local school.

Ricardo Guindon was born and raised in Monteverde. He is part of the first generation of Quakers in Monteverde. Ricardo has more than 30 years of experience as a naturalist guide. 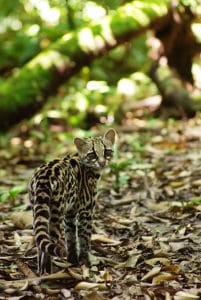 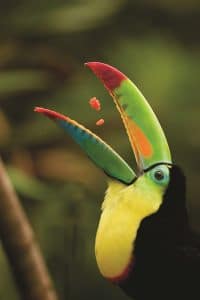 Arenal’s Secret Trails: We’re here to share a few lesser-known trails in the popular destination of Arenal. These trails are a true gem to explore, for hikers, birdwatchers, and nature enthusiasts alike. You can count on less crowds, in fact you practically have the trails all to yourself!

Arenal Observatory Lodge Trails and Hanging Bridges: Even if you are staying at another property, we have access to the expansive trail system at Arenal Observatory Lodge (just 30 minutes from La Fortuna town). This is the only lodge within the Arenal National Park, boasting more than 15 miles of private trails in tropical foothill rainforest and host an amazing 400 plus bird species, few places in tropical America have such an extensive bird list. In addition to birds there are great opportunities to encounter wildlife such as Spider Monkeys, Howlers Monkeys, Coatis, Brocket Deer, Tamandua Anteaters and Peccaries. Even wild cats such as Puma, Jaguar and Little Spotted cat have been seen along the roads and trails at the lodge! Unique to this area are two private suspension/canopy bridges, an impressive canopy tower, a new Volcano visitors center with Smithsonian information and National University data and photos on the history of the Volcano and a beautiful nearby waterfall.  Another highlight are the feeders by the restaurant and lookout, where more than 30 species of birds have been identified, also surrounding many of the grounds of the hotel there are flowers and fruiting trees which are especially attractive to birds and animals like coatimundis. An incredible diversity of more than 30 species of hummingbirds have been attracted to the hedge known as the “opossum tail”. The lodge trails are really a hotspot for naturalists and hikers alike!

Bogarin Trails: These trails are just a surprising 10-minute walk from the church in La Fortuna! The terrain is flat, wildlife is prolific while the crowds are scarce, and there is a great history behind the trails.  Some 20 years ago the conservationist and local guide Geovanni Bogarin talked to the owners of a small pastureland in the heart of La Fortuna and convinced them to change the main income of the farm by letting the forest grew back, so instead of cattle ranching, a new income could come from visitors looking for wildlife. Today Bogarin Trails is an oasis of life for animals and tropical birds. We invite you to learn about and appreciate the abundant and amazing diversity of this nature sanctuary, you will see animals and plants typical of the rain forests, from orchids to giant ceibos, from monkeys and sloths to frogs and Jesus lizards and dozens of bird species. The trails are also open at night to look for owls, frogs, insects and with luck some animals like moving sloths, tamanduas and bats.

Gretchen is the Marketing Director for the Kusini Collection.