In celebration of this year’s World Lion Day, we are diving into all things feline in the Kusini Collection! From pumas, ocelots, lynx and other cat species of the Americas to the big (and small!) cats of Africa and Asia, we never tire of searching for and observing these incredible animals in the wild! Today, we give you the latest news on these cunning creatures from several of Kusini’s partners. 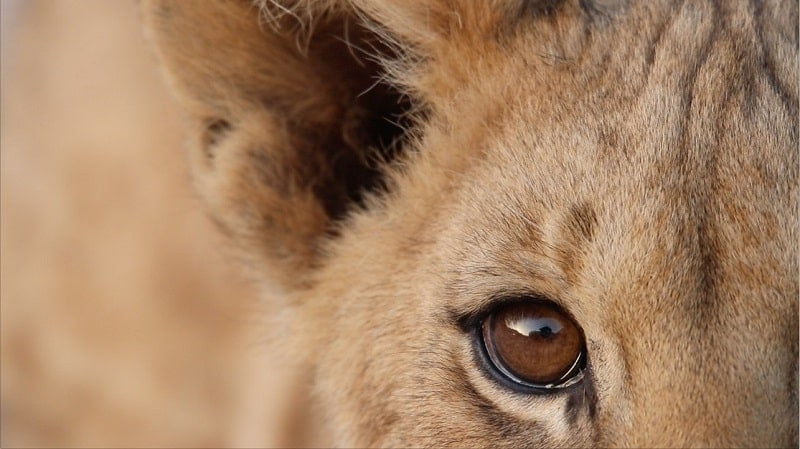 Ultimate has been at the forefront of celebrating Africa’s lions and their importance to the continent’s ecosystems. Through their Conservation Travel Foundation, they are proud founding members of Lionscape Coalition, a tourism-led partnership working with the Lion Recovery Fund to support lion conservation across Africa. In just 5 years the Lion Recovery Fund has invested over US$ 26 million into 23 African countries and into 201 lion conservation projects! You can support their efforts here and be sure to check Ultimate’s Facebook page for updates on their activities, including a special World Lion Day announcement. View this video for 13 seconds of desert-adapted lion bliss! 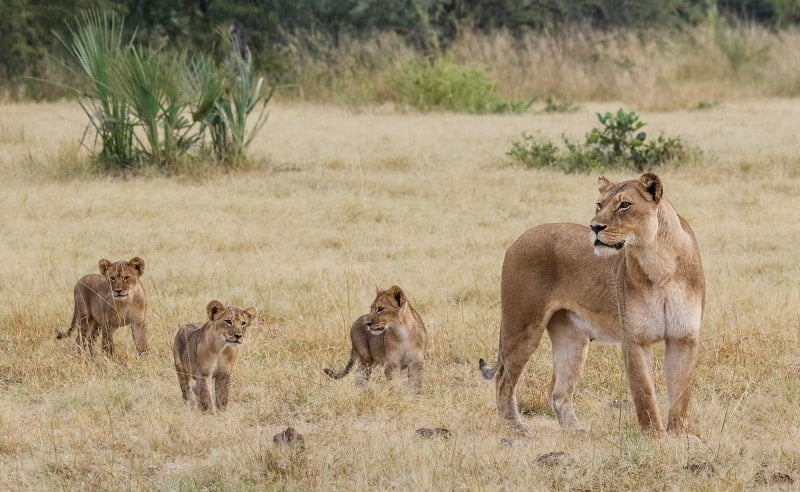 It’s triplets!! Earlier this year there was great joy among Imvelo guests and guides when Bomani lioness Nomvelo presented her three brand new cubs on their first walkabout. Since then, regular sightings have provided great pleasure and photo ops for lucky guests. The photo above was taken at the small pan just a short distance from the family tent at Bomani.
Nomvelo first arrived on the Bomani/Camelthorn scene when she was a young nomad. She was found feeding on a nearly fully adult giraffe she’d killed on her own on the Bomani concession back in March 2017. Her distinctively torn right ear, probably ripped in a cat fight when she was younger, makes her very recognizable.
Read more about Nomvelo and the saga of the Ngamo lions on Imvelo’s Facebook page. 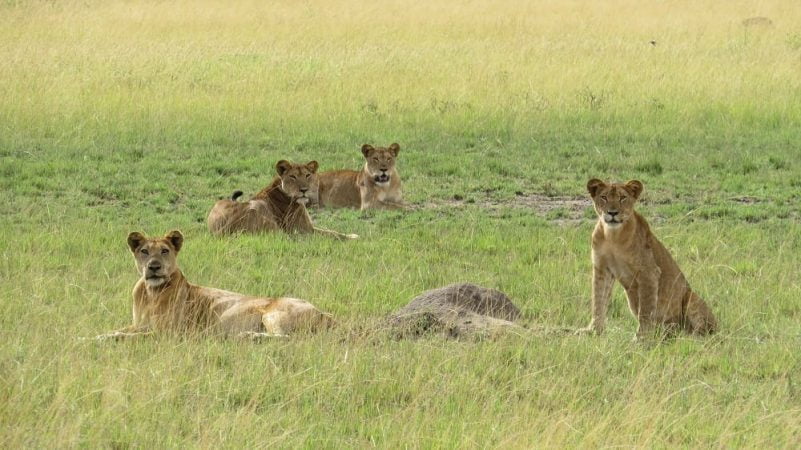 The Uganda Carnivore Program is devoted to the research and conservation of Uganda’s large carnivores, including lions, leopards, and hyenas. Previously active in many of Uganda’s national parks, today it is focused on the northern sector of QENP. They collaborate closely with the Uganda Wildlife Authority (UWA) and Makerere University. On Tad’s last FAM to Uganda with Classic Africa Safaris (CAS), he had the opportunity to join Uganda Carnivore Project (UCP) for a morning tracking lions in the northern Kasenyi plains of Uganda’s Queen Elizabeth National Park (QENP).

Within QENP, vehicles must stay to the designated roads and tracks. But one of the distinct advantages of the lion tracking activity is the ability to drive off-road in search of the lions! The FAM group enjoyed watching James, a senior research assistant from UCP, and their CAS guide, Habib, interact as they were tracking, using a combination of hand signals and the local language. They found multiple big cats on their tracking adventure with some spectacular sightings! Visit the Kusini blog to read about their entire lion tracking experience and ask Lyndsay about adding a lion tracking adventure to your travelers’ Uganda safari with CAS. 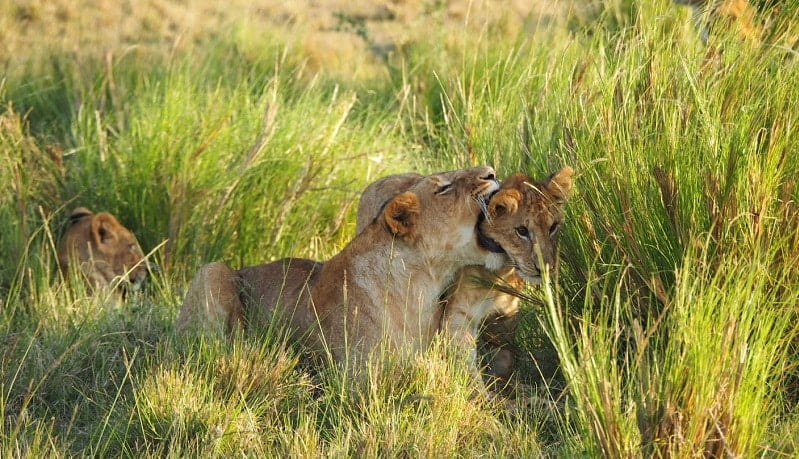 While a walking safari might not be top of mind when imagning a visit to the Masai Mara, you might want to reconsider. Gretchen visited the Mara as well as several conservancies with Albatros recently and had one of her best walking safaris ever! During an all-too-brief stay at Naboisho Camp, she was fortunate to spend a morning walking through the conservancy with ‘Safari Fundi’ Roelf Schutte, a walking guide with experience across Africa. During their walk, they encountered lions feeding on a topi, another pride that attempted to take down a zebra as they watched, lions on walkabout and of course lots of other species including plains game and elephant. Well over a dozen lions seen while on foot made for an exhilirating morning. This is to say nothing of the more than 60 lions they saw on game drives over a matter of four days. The Masai Mara and Albatros always deliver! 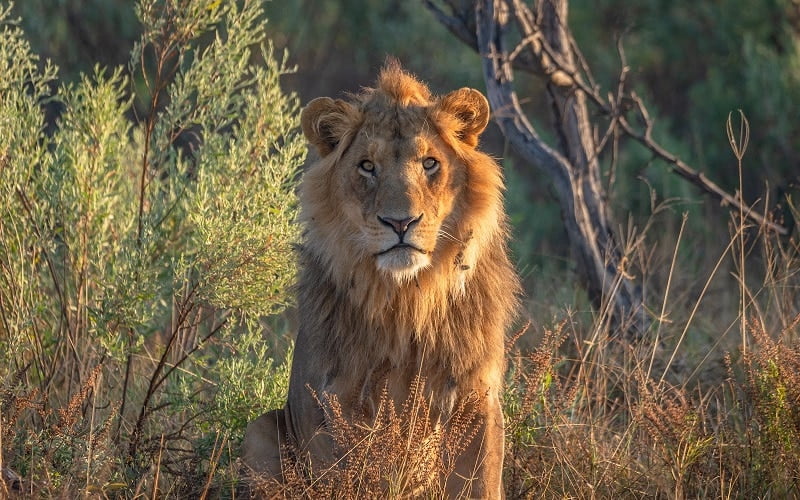 Marc was in the Duba Plains concession back in May for a short post-WAA FAM in Botswana. His group set out early in the morning and as the fog was starting to lift, his guide Carlos noticed that a heard of 30 or more buffaloes were hyper-aware while drinking by the watering hole. Then out of nowhere, from the thickness of the fog, two sub-adult male lions emerged from the bush about 70 yards from the herd. The lions scanned, surveyed and waited. It was during this sentry-like behaviour when Marc snapped this photo. It’s one of those moments when you lock eyes with a lion and a sudden jolt of goosebumps hits your entire body. The quietness of the scene somehow made it tense. This is how majestic a lion can be. They can make your heart race without any actual action! 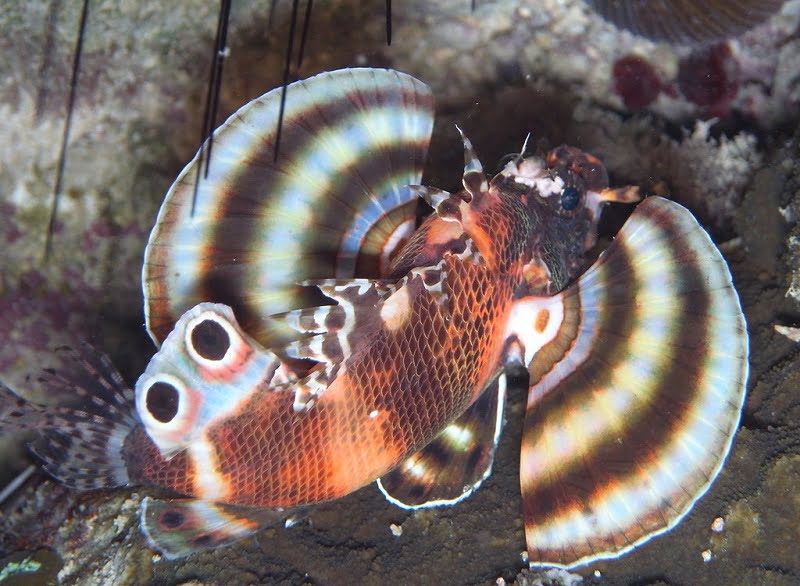 Okay, so perhaps we’re being a bit cheeky, but we thought we’d check in on the lions in the water – lion fish! The lion fish is naturally part of the ecosystem in East Africa, though in many parts of the world it is considered invasive. They can be found all over the reefs at The Manta Resort but are kept in check by one of its only predators, the grouper. There quite a few different species of lion fish, including the beautiful but venomous dwarf lionfish. The big story at the moment on The Manta Resort’s reefs is the resurgence of different species of grouper population that find safe haven in Manta’s Marine Protected Area MPA. This is why they don’t have a population issue with the lion fish on their reefs. The species is one of the favorites for snorkelling guests as they always put on a great show. The most beautiful lion fish that is often seen on Manta’s reefs is the dwarf ocellated lion fish or twinspot lion fish. 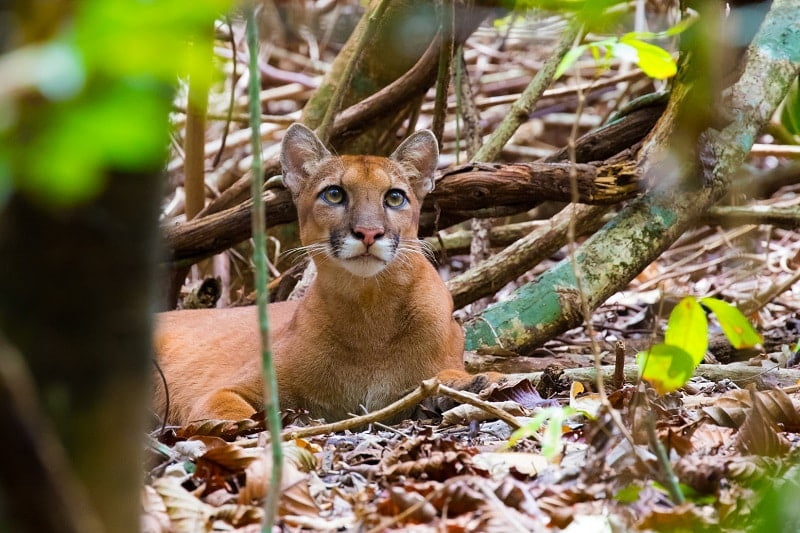 Pumas can be spotted, if you’re very lucky, throughout the Americas including all the destinations in Kusini’s Americas collection. Other wild cats ranging from ocelots and oncillas to jagarundis and bobcats might also be glimpsed by a lucky few when traveling with our partners, depending on your geography. You never know…Tad and Gretchen once glimpsed a jaguar while having lunch in Tikal (Guatemala)!

All cats in Costa Rica are considered threatened species due to illegal hunting, conflict with domestic animals and habitat loss, but this designation helps to protect the species. Luckily, some remaining habitats are large enough to have healthy populations of pumas and jaguars in both Corcovado and Area de conservación Guanacaste (a UNESCO World Heritage Site). Also, Tortuguero National Park and Arenal have ocasional sightings of pumas and other smaller species like de ocelot, margay, little spotted cat (or oncilla), and jaguarundi. While sightings are rare, Costa Rica Sun Tours (CRST) guests do sometimes spot the cats!

We suggest CRST’s Costa Rica Deluxe South Pacific and Cloud Forest itinerary for a chance to enjoy some of Costa Rica’s most fantastic natural areas.. Playa Cativo is right next door to Piedras Blancas NP, which offers visitors a chance to encounter rare and fascinating creatures, including all four species of monkeys (capuchin, howler, spider, and squirrel) found in Costa Rica, white-nosed coatis, agoutis, peccaries, and sloths. Although rarely seen during the day, the park is home to five species of cats: jaguars, pumas, ocelots, margays, and jaguarondis. The waters host many marine species including dolphins, whales and more. 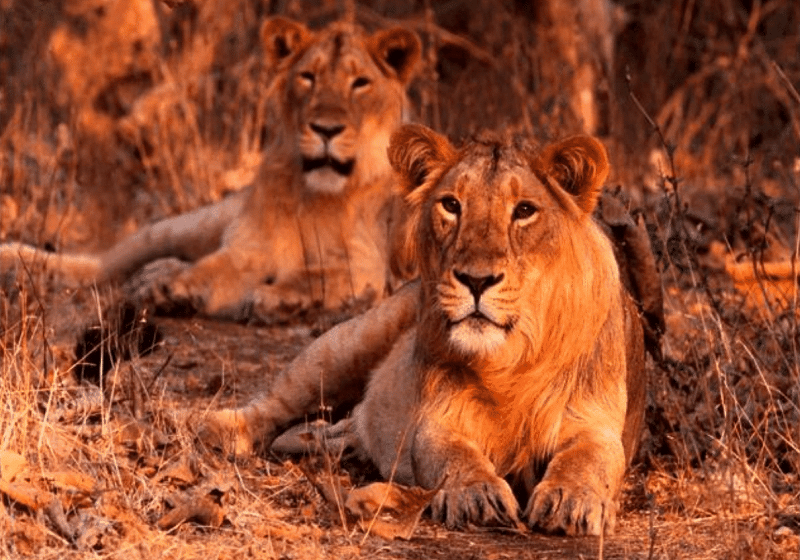 The best place to see Asiatic lions with Encounters Asia is in Gir, Gujarat. India offers so much to travelers – but travel in India for nature, however, is not just about wildlife! Wherever your guests travel with Encounters Asia, they are engaged in cultural experiences as well. For your clients seeking a wildlife-focused expedition, Encounters Asia will take them to visit national parks and reserves such as those at Sasan Gir and the Rann of Kutch in search of the rare Asiatic Lion and the elusive khur, a rare wild horse. Gujarat also has thriving populations of leopard, sloth bear, wolf and blackbuck, as well as huge congregations of birds, making for excellent bird watching. Twitchers can try to spot several regional endemics and globally threatened species including vultures, bustards, hypocolius, white-naped tit, and Stoliczka’s bushchat, while the roost gathering of raptors, particularly harriers, at Velavadar National Park is one of the world’s largest and most impressive. View a sample itinerary here.

Gretchen is the Marketing Director for the Kusini Collection.