Reaching its peak in the late Classic period, (c. AD 600-700) Yaxha has far fewer visitors than its larger cousin/rival Tikal. It is located on a ridge overlooking a lagoon of the same name. Yaxha is derived from the Mayan word for “blue-green water” (another little visited Mayan site, Topoxte, it located on an island in the lagoon, and can be accessed by a 15-20 minute boat ride. This is highly recommended for the adventurous and or archaeology nut). Access is a bit more challenging than Tikal, though only moderately so. It takes around an hour and a half to drive from Flores; the final 30 minutes are along a dirt road, which is well kept though it can be rough ride in the rainy season. Yaxha is also well known fans of the reality show Survivor as one season of the show was filmed here in 2005. 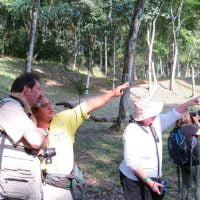 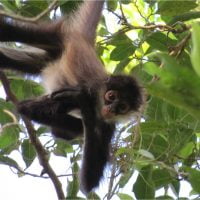 Spider monkey in the canopy at Yahxa

At its peak, Yaxha was believed to have covered 92 sq mi with a population of 35-40K. It was rediscovered in 1904 by Teoberto Maler , a German-Italian explorer but archaeological work didn’t begin until 1980. Today, only 8% of the site has been excavated, which along with the lack of visitors, gives it an exciting lost-in-time sort of feel. The excavated temples and palaces are magnificent like at any Maya site. But for me, the highlight at Yaxha is ambling through the vibrant and lush jungle which connects the restored parts of the site. Howler and spider monkeys abound along with a myriad of fascinating native trees and plants, all of which seem to have a medicinal or culinary use for the Maya. Large mounds of vegetation hide other un-excavated structures along with their ancient history and secrets. 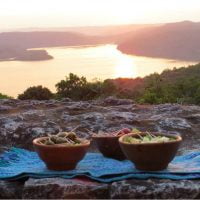 Sundowners from the top of temple 216 at Yaxha 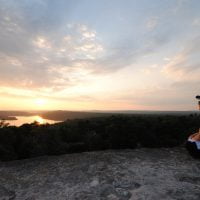 Moments of zen at Yaxha 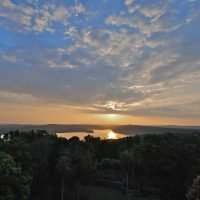 Another unique feature of Yaxha is the chance to watch the sunset from the top of a Maya temple. I like to think of this as the Guatemalan version of the African sundowner and it’s just as impressive as any African setting. The view from the top of Temple 216, the highest at Yaxha, looks out over the endless jungle and the shimmering Yaxha lagoon. Access is via a long staircase attached to the side of the temple, winding its way through the canopy. There are a lot of stairs but it’s absolutely worth it for the experience that awaits on the top. Like any good sundowner, we enjoyed a sundowner snack of olives, cheese and crackers (alcoholic beverages are generally frowned upon given the 100+ foot elevation and lack of railings, though a bottle of wine can usually be arranged as desired). The panoramic view atop the temple is complimented by the calls of myriad birds and the shrieks of the howler monkeys reverberating throughout the jungle below. It’s a stunning setting and a fitting finale to the magic of Yaxha.