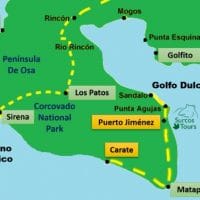 Covering nearly half of the Osa Peninsula, National Geographic calls Corcovado National Park “one of the most biologically intense places on earth” and for good reason! Long ago, this unique site was an island that eventually connected to the mainland. It is one of the last places to spot jaguars, tapirs and white-lipped peccaries in Central America, not to mention the hundreds of other animals, plants and birds that call the park home.

The park is open to the public and is a favorite of backpackers and day trippers alike. With ample lodging in the area, it is easy (and encouraged) to include exploration of the many forest trails. They are similar in terms of terrain, think uneven, river crossings, waterfalls, deserted beaches, humid, and generally jungle-like. The off-the-beaten-path hikes are available from the four ranger stations: La Leona, Sirena, San Pedrillo, and Los Patos. The focus of these stations is research, conservation, education, and Sirena offers a covered area and basic sleeping accommodations. 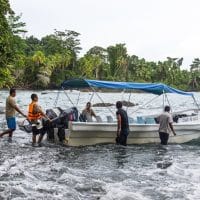 From Drake Bay: Popular accommodations around Drake Bay include Copa de Arbol, Aguila de Osa, La Paloma, Caletas Lodge, and Casa Corcovado. From Drake Bay it is approximately 30 minutes by boat to San Pedrillo Station and one hour by boat to Sirena Ranger Station. *With permission from park authorities, it may also be possible to fly by private charter to Sirena airstrip. 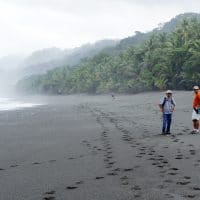 From Puerto Jimenez: Popular lodging near Puerto Jimenez include Lapa Rios, Iguana Lodge, Luna Lodge, and El Remanso. You can access La Leona Ranger Station with a 45-minute drive to Carate and then hike. Sirena Station is accessed by a one-hour public boat ride (Tue/Fri/Sat) or a 20 KM walk from La Leona! Los Patos Ranger Station is reached using 4X4 taxis for 1 ½ hours along dirt roads with river crossings. *With permission from park authorities, it may also be possible to fly by private charter to Sirena airstrip.

If you are really looking for an adventure, the stations are connected and would require 3 days/2 nights and long walks (8-10 hours per day), but a superb experience! If you choose a day trip or to delve deeper into the rainforest, you will be rewarded with incredible wildlife sightings both ways.

Highlights of Each Ranger Station and Surrounding Trails 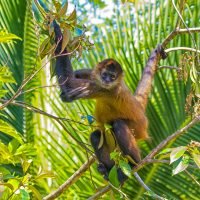 La Leona Ranger Station, Corcovado National Park
La Leona Ranger Station is located at the southernmost tip of the Corcovado National Park. This south entrance to the park is popular with hikers coming from Puerto Jimenez. Our exploration begins with an early morning drive to Carate – literally where the road ends! Here we start hiking parallel to the beach for 3.5 kms until we reach La Leona. After we check in with the park rangers, we continue along the beach for 7 kms, heading in the same direction that would eventually take you to the famous Sirena Station. From this point on, we are in an incredibly unique habitat – the lush and vast and protected rainforest meeting the beaches of Corcovado! Wild creatures are to be expected walking along the beach, and with some luck, tapirs or even a wild cat may be seen coming out from the forest edge! From the beach the guides search the canopy of the forest with binoculars looking for monkey troops, colorful scarlet macaws and toucans feeding in the giant trees. If the weather permits and you don’t mind getting your shoes wet, you can walk within the Madrigal river to explore deeper in the forest looking for life in the dark understory – searching for species such as poisonous frogs, Jesus Christ lizards, tinamous or antbirds, just to name a few. It is hard to describe the amazing biodiversity of the famous Corcovado National Park. Following our adventure, we will return to Puerto Jimenez later in the day. 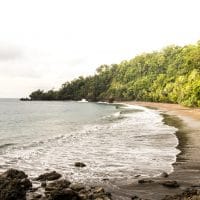 Sirena Ranger Station, Corcovado National Park
Following a hearty breakfast, we take a scenic boat ride along the Pacific Coast to Sirena Ranger Station, the heart and most famous of the ranger stations of Corcovado National Park. Sirena could be considered the last wilderness frontier in Costa Rica! This lowland rainforest station is well known for wildlife encounters, species such as tapirs, anteaters, scarlet macaws, toucans, pumas, and the four species of monkeys that exist in Costa Rica are among some of the animals you hope to see. You will have time to explore with your expert local guide with hikes on the river edge trail, the Guanacaste trails, or the beach trail – all incredible areas to look for wildlife. The wildlife here is so rich that even during lunch break the surroundings of the park house are a productive locale to look for colorful birds and troops of monkeys. After this unparalleled experience, we will depart Sirena by boat, and return to the lodge in the afternoon. 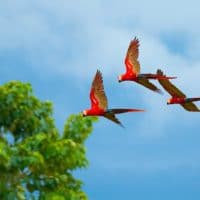 San Pedrillo Ranger Station, Corcovado National Park
Corcovado National Park has often been described as one of the most biologically intense places on earth. The park extends over 100,000 acres on the southwest coast of Costa Rica. A famous access to this huge park is from San Pedrillo Ranger Station, which is located less than an hour by boat, south of Drake Bay. Here your guided nature walk will bring you into a wonderland of ancient, steamy forests dominated by huge canopy trees, thick woody vines, and abundant walking palms. The park is home to much wildlife including all four monkey species found in the country, sloths, agoutis, coatis, tayras, pumas and jaguars – although these shy and elusive cats are rarely seen. Some endemic birdlife like the Baird’s trogon, black-cheeked ant tanager and orange-collared manakin are also normally seen. 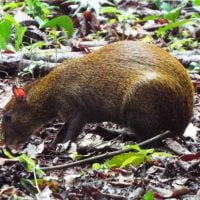 Los Patos Ranger Station, Corcovado National Park
A little know site within Corcovado wilderness park is Los Patos Ranger Station. Here kilometers of trails eventually lead you to the famous Sirena Station. At Los Patos you will find old growth rainforest, a beautiful example of the type of forest that houses some of healthiest populations of scarlet macaws, all four of the nation’s monkey species (the only park that does so), plenty of other wildlife and the slight possibility of encountering a jaguar – or more likely jaguar tracks crossing a trail. Although this station is remote, it can be visited from Puerto Jimenez in 4×4 taxis during the summer and in the rainy season (only if the rivers are not too high)!

The team at Costa Rica Sun Tours loves to talk Corcovado so don’t hesitate to reach out with questions and for help to determine what the best fit might be! 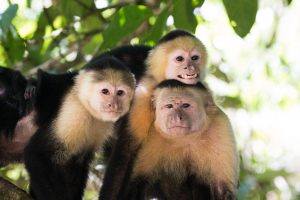 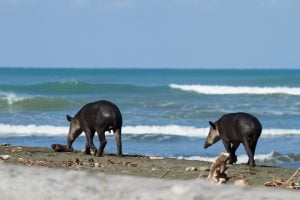 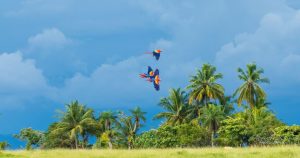 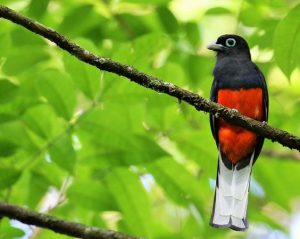